While we were on vacation last week, and Don was out fishing, I sat at my sewing machine and spent the day happily sewing and watching FoodTV. I watch it in cycles - depending on what else is on and whether I'm into the detective shows that week or not. This time, Bobby Flay was doing a great grilled chicken dish that I had to try at home. It called for tangerine juice. I couldn't find any, after searching 4 different grocery stores. So, since I had bought a tangerine for the zest, I used the juice from it along with some orange juice to make the required 2 cups.
I also decided to use boneless chicken thighs instead of thighs with bones. I quit buying bone-in chicken a while back - just decided I liked boneless breasts and thighs more. 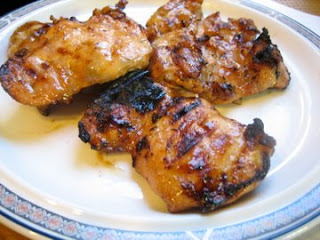 In a medium saucepan, sauté the onion in the oil until soft. Add juice, zest, and thyme; bring to a boil. Lower the heat a little, but keep it boiling, and cook until reduced to about 1/4 cup of liquid is left (about 20 minutes). Remove from heat; whisk in the soy sauce and maple syrup. Cool. Grill chicken until almost done, then baste well with juice mixture.

Since I have a penchant for spicy glazes and sauces, I think that if i made this again, I would add some heat - perhaps some crushed red pepper? But we really liked the orange flavor in this dish.

I mentioned in the post below that we received cabbage leaves in our produce shares. But then I remembered one of the organizers mentioning that she was able to get some spinach. As I was going through these greens, I realized that about 2/3 of them were spinach leaves, and the rest were cabbage-like greens - I'm not sure what they were, but I think they were cabbage leaves. But I cooked them all together, anyway. This is a dish I learned in Germany and haven't made for years. Now that we've had it again, we remembered how yummy it really is. 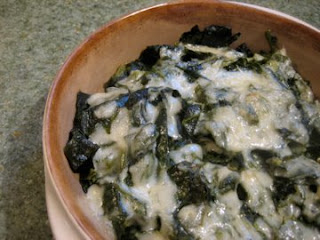 Preheat oven to 350˚. In a large saucepan, boil some water. Plunge the spinach into it and boil for 5 minutes. Drain, dry, and coarsely chop the spinach. In a saucepan, melt the butter. Fry the onion and garlic until the onion is soft and transparent. Add the spinach and sauté lightly until most of the moisture has evaporated. Season and add nutmeg and paprika. Grease an ovenproof dish. Sprinkle the bottom and sides with half the cheese. Place the spinach in the dish, level the top, and sprinkle with the rest of the cheese. Bake for 20-30 minutes until the cheese melts. Serve hot. Serves 4.

I still have tons of vegetables to use up - as for the fruit, I made Sangria Fruit Salad - and have enough left over to take with my lunch for tomorrow's hearing. The remaining strawberries have been flash-frozen, and are now ready to grab whenever I want them. The apples will be enjoyed in many ways, and I think I'll freeze the bananas that Don doesn't eat. (Since I got a volunteer's share, I came home with about 20 bananas!)

Does anyone know how to cook an eggplant for a non-eggplant eater? About the only way I could eat it would be fried, and I don't want the grease. Do you think I could do it in the oven like I do Crispy Oven -Fried Fish or the Zucchini Oven Chips?
Posted by Cyndi at 8:23 PM

Another thing to try is a baba ghanoush which is a delightul eggplant dip you serve with Pita. Just need a bit of Tahini, garlic and lemon juice.

I've actually done both on the blog. You can see the picture and see if it's something you wanna try.

sounds delicious....mouthwatering i can't wait to try this chicken and all you have to do is to step outside for some of the ingredients...i was wondering about the ingredients...one of my friend introduced me to a great resource www.myethnicworld.com and i thought that i pass great along as well.

Mmm.. the chicken sounds really good. I will have to try making it sometime soon!