When I was assigned Dorothy's blog Shockingly Delicious for this month's Secret Recipe Club, I thought, as most of us do when assigned a blog, that it belonged to a stranger. But I already "knew" Dorothy! (She just didn't know it.)


My local newspaper is the San Bernardino Sun. Back in December of 2007, Dorothy was an editor for one of the papers in the Sun's group of papers, the San Gabriel Valley Group. She had a recipe for Baked P'Sketti Squares printed in the paper, and I made it and blogged about it back in January of 2008. You can see that post here. I also submitted it to Ruth's Presto Pasta Night roundup. Dorothy's recipe was a delicious and healthy take on baked pasta that incorporated shredded zucchini.

In The Secret Recipe Club, we are assigned another member's blog. We peruse the blog for something we'd like to make, and make it.  We then blog about it, and we all post on the same day. We don't know who has our blog until after the "reveal."  As I was going through Dorothy's blog, I kept in mind the ingredients I knew I already had on hand. When I saw her recipe for Quick Fresh Berry Streusel, I knew that was the one.  I had to make a couple of changes, though. I like to keep lots of frozen berries on hand, and in my freezer was a giant bag from Costco.  So frozen berries it was. Dorothy also used ground flax in hers - I omitted that, and added some oats to give the streusel a little heft.  It came out a little like a berry crisp. 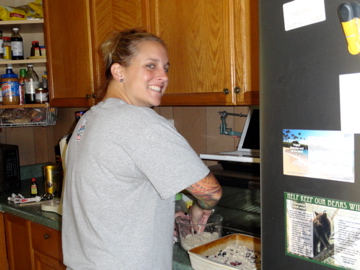 My daughter was visiting for the day, and since she has decided she needs to cook for herself more, offered to help make this dish. Here she's adding the streusel to the pan full of berries. When we were mixing up the streusel and got to the step where you add the almond extract, she nearly swooned over the the scent.  (Yes, it smells like Jergen's lotion).  We decided that it really made a wonderful addition to a streusel topping. 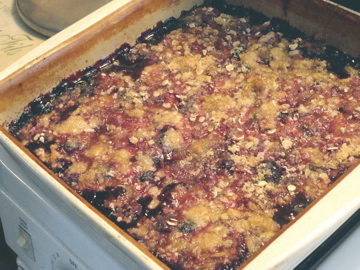 Right out of the oven, this looked soooooooo yummy! 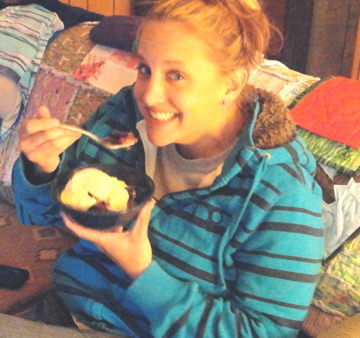 We topped ours with vanilla ice cream. 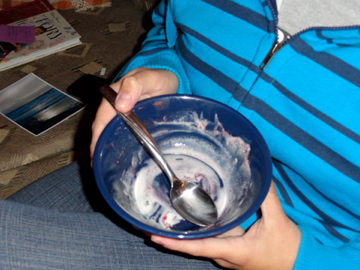 Theresa wanted to pass on to everyone that she really liked this.  We all did.  This is now my go-to recipe for berries of any kind.  Thanks, Dorothy, for another hit!


Check out the links below for more Secret Recipe Club posts!

I guess you call this candy - it's not cookies or cake or pie.  And it definitely tastes like candy.  It has only 4 ingredients, too. I don't know where I got the recipe - I've been making these since my college days. (So that's at least 35 years ago!) 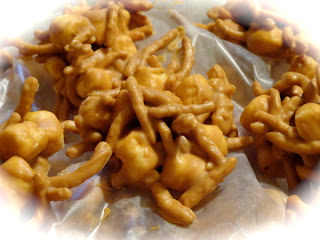 See?  Simple. Quick.  My daughter's favorite treat - so I have to be sure to save her some for when she comes up on Saturday.

Update on that "heck of a week" post:
- My hip quit hurting. I still go to water aerobics and have had no problems other than just getting plain old tired.
- My daughter does NOT have Crohn's Disease. She has some dietary issues, and nothing more than that. Hooray!
- Don's truck is fine.
- Theresa's truck is finer than fine, now that it has a brand new transmission.

I will survive the mini-crises along with major ones. Life is still good. : )
Posted by Cyndi at 5:58 PM No comments:

A heck of a week

I'm so glad this week is over.
1. Sunday night I was awakened by severe pain in my lower right abdomen. It hurt any time I moved. By Tuesday it had migrated to my hip. I was pain free while lying or sitting down, in excruciating pain when I stood up, and then after walking 10-15 steps, the pain would go away. I went to the doctor on Wednesday, had my hip X-rayed, and got a tentative guess that it could be a bone spur. I was told to continue my water aerobics, so I did.
2. I took my daughter to a check-up at UC Irvine, where she learned some scary news. She had to go back the next day to see a different physician, and is now scheduled for two procedures next week, one of which will be under general anesthesia. The fear is that her initial diagnosis (6 years ago) of ulcerative colitis was incorrect and she actually has Crohn's Disease.
3. Don ran over a giant log in Lee Vining 2 weeks ago and ruined the spoiler underneath the front of his truck. He got that replaced this week, and it wasn't cheap.
4. Our daughter's truck needed to have its transmission replaced. We dropped it off on Wednesday, and picked it up Friday afternoon. $3K. Ouch.

I DID have a wonderful quilt guild meeting on Friday, and this afternoon my hip quit hurting. Texas Tech defeated Kansas this morning. So the week has ended with a couple of nice things.

I spent today at the sewing machine, except for a quick trip over to Oak Glen to see a small quilt show. That will be a separate post on Just One More Stitch. Dinner was Pioneer Woman's Cajun Chicken Pasta--and it was wonderful.

- Posted using BlogPress from my iPad