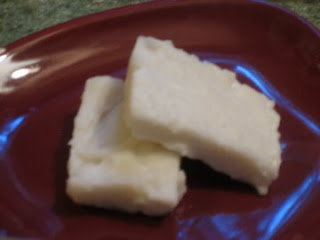 I saw this yesterday on Pikko's blog, Adventures in Bento Making. I bought a can of coconut milk a while back for a recipe, and never got around to using it. When I saw Pikko's post, I decided to give it a try. The directions said to cook until thickened, but I didn't cook it enough. You're supposed to be able to cut it all in squares - but only the middle section of the pan could be cut. The rest stayed soft, like a custard.

I have to admit, we didn't care for this all that much. I think if I'd added vanilla, it would have been more like a pudding. The flavor just seemed a little off - and I'm sure it's because it was something so different from what we're used to. I'm told this is a traditional dessert at Hawaiian Luaus, but since I've never been to one, this was brand new to me. As I've always said, I'll try anything once!
Posted by Cyndi at 2:40 PM

If it makes you feel any better, the recipe I used tasted "off" too. I guess not all recipes are created equal and I'm waiting for my cousin to send me the one she likes! :)