Go to my travel blog, Wanderlust, for more interesting reading.
Posted by Cyndi at 10:05 PM No comments:

Life events are just a bit overwhelming these days - it really sucks to be a teacher leader (I'm president of our local union) in California right now. Billions - no exaggeration - BILLIONS have been cut from public education, without any change in what is expected; so much sadness and so much fear among the members of my association. I hate to add that I'm also dealing with several member discipline issues where it is clear that the administration is overly-heavy-handed in its punishment. So with negotiations, budget cuts, bullies at the district office, 60+ pending layoffs (we only have 430 members) and abysmal morale, it's hard to go home and think about blogging about food.

I'm sure I'll be back. But right now my escape needs to be to quilting and stamping, where I don't keep gaining weight. : )
Posted by Cyndi at 12:57 PM 1 comment:

The power came back on Wednesday the 27th.
We still have no phone - though Verizon promised they'd be working on it today. There happens to be a 12-foot high snowbank below the pole they need to work on; Don's not sure they're going to be able to reconnect the line without a big truck and cherry picker. And there's no place to park one. Are we going to have to wait until the snow melts in April to get a phone again?

Without a phone, I have no internet access at home...disaster!

Today I came to work without my cell phone - it's on the kitchen counter. I can't call Don to bring it to me, since we don't have a working phone. I feel bereft. Lost. Floundering.

I'm still having to park next door - my parking place is under 10 feet of snow, dumped there by the plow as it cleared the street. I'm glad Tom isn't interested in coming up to his house any time soon.

The snow on our deck has compressed and melted, and is now only 3 feet high. One of these days we'll get to it and clear it off before the deck collapses.

Today is day 5 with no power and day 4 with no phone. We have water - temporarily.

Here's what we know about the water: most of our town gets its water from a giant tank up in Snow Canyon above Spring Street. An avalanche took out the main line from the tank. We have a backup system, which we normally use during the summer if the previous winter wasn't wet enough. It utilizes a pump that draws water from an underground river. That pump needs electricity - there is none. So, we had no water while they searched for a mega-generator to run the pump. Last night around 9 pm we discovered we had water again. The pump is running. Now they need to fix the main line from the tank.

Our neighbor John came over around 8, excitedly telling us we had phone again - that is, until he remembered in mid-sentence that our phone line had been knocked down. So while most of the town has phone service again, Verizon says they won't come up to fix our line until February 2.

We still have no power, either. No telling how long that will take. No power means:
- eating your meals in the recliner so you can be close to the fireplace
- sleeping in sweatpants, sweatshirts, hats, and gloves (isn't that from a Dar Williams song? !)
- ice on the inside of the bathroom window
- making toast in a skillet


I'll be adding more as I think of them.
Posted by Cyndi at 1:51 PM No comments:

It started snowing last Tuesday; it didn't stop until Friday evening. The first few days were no big deal - we'd shovel the pathways to the woodshed and the street, and I'd parked my Jeep under the carport next door (my friend's house - he lives in the valley). But Friday morning we woke up to several more feet of snow.


I got a call from the District at about 6:15 saying school in Yucaipa was cancelled due to snow - they got several inches and the roads were slick, so it was a safety issue. (Yucaipa is about 2600' - we're at 6000'). I was on the phone with my friend Patrick at 6:30 when the power went out.

Okay, we can deal with the power being out - we have 2 generators. One is now hooked up to the light in the kitchen, the lamp in the living room, the fan in the fireplace stove box, the regrigerator, and the tv/satellite. (We actually got to watch the playoff games yesterday.) The other, smaller generator is hooked up to the freezer downstairs in the basement. We run each one a few hours at a time in order to keep the food cold and the living room above 60˚. We've gone through tons of wood, and eat our meals in the recliners since they're next to the fireplace. We sleep under several comforters, and I"m wearing gloves to bed since it's so cold in there.

On Saturday morning, we woke up to no phone service. No land line, no cell. Then around noon, while we were outside with our neighbors, the next little disaster happened. Don and John were in the street - John was using the snow blower - we all heard a loud c-r-a-c-k, and a giant limb (1.5 feet in diameter) fell off the huge cedar in our front yard. The two men were directly underneath it, and they ran for their lives. It landed in a cloud of snow and branches right behind them. As it fell, it took out our power and phone lines - stripped them off the main pole. They're still connected to the house, so they're dead lines. Later Saturday afternoon, after the road was plowed and we'd cleared the tree branch from the road, we drove down the mountain for food and gasoline for the generators. I called Verizon - who gave us an estimate of February 2 for the phone line. I called Edison, and we're on their list - there are dozens of power lines down all over town - some they can't get to until the 15-foot-high berms are cleared. It's like those old-time Christmas tree lights - every single line has to be connected in order for all the power to be turned back on. We'll probably be without power at least another week if not more.

But this morning we woke up to no water. The initial guess from our neighbor is that an avalanche took out the main pipe from the tank above Spring Drive. When we had water, we could cook, and wash dishes, and even take showers - we have propane to heat it up - but now we have no water. We'll use our fresh water supply from our earthquake supplies to drink and cook, and we have a few hundred gallons in the spa we can use to flush the toilet - but we're going to have to call upon friends down the mountain for showers.

The weather people on TV say this is the most snow in over 50 years. It's definitely the most we've seen in 20. The Big Bear Valley, further up Highway 38, is closed. All 3 highways in and out are shut down; the gas stations are running out of gas, and the stores are running out of supplies. Apparently thousands of ski/snowboard yahoos from LA went running up there midweek, and when the last storm dumped 2 more feet on top of the 3 already there, everyone got stuck. There are avalanches on Highway 18 at the Arctic Circle, and stuck cars all over the place blocking other sections of the roads. (Flatlanders....)


Well, here are the best of the pics I've taken the past few days: 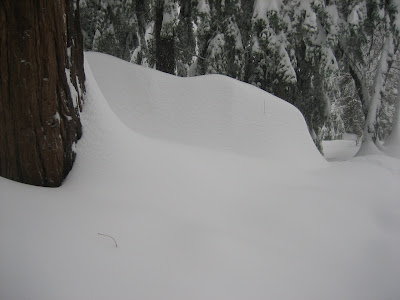 This is a red Chevy Blazer. Really. It's across the street from our house. 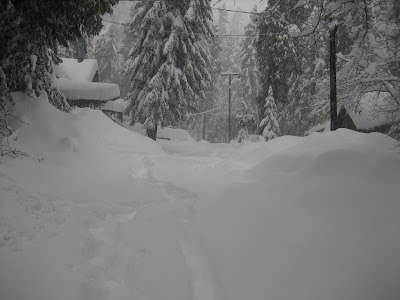 This is our street - I'm standing at the bottom, on Valley of the Falls Drive, looking up Snowdrift. This was taken Friday around noon, about 10 hours before the plows came. The snow is about thigh deep - this was Thursday night's snow, since the road was clear before that. 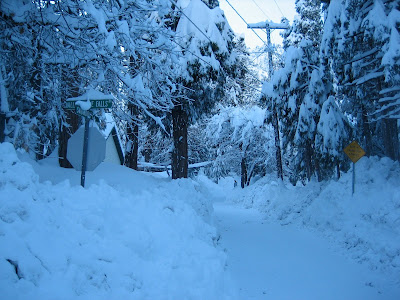 This was Saturday morning, after the plow had come the night before. 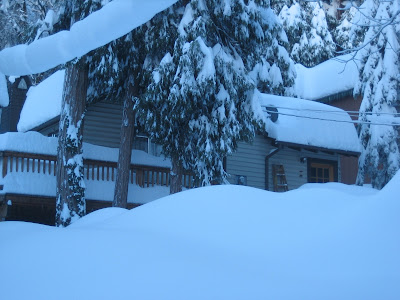 This is our house. See the snow on the deck to the left? 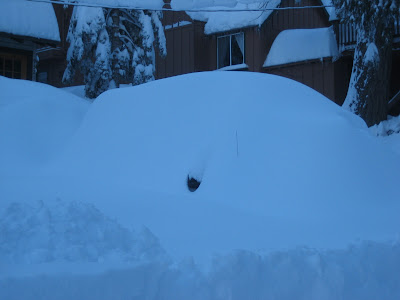 This is my husband's truck, before he started to dig it out. 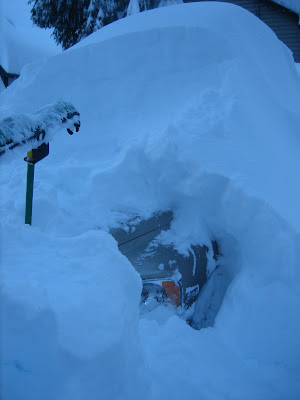 Yeay! We found the front bumper! 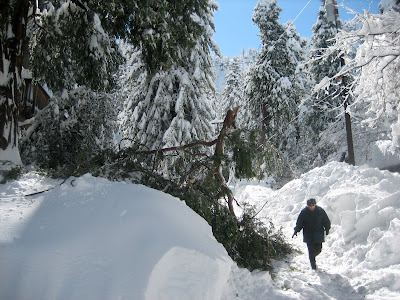 This is the branch that came down and almost killed Don and John, and took out our power and phone lines. That's our neighbor Barbara. 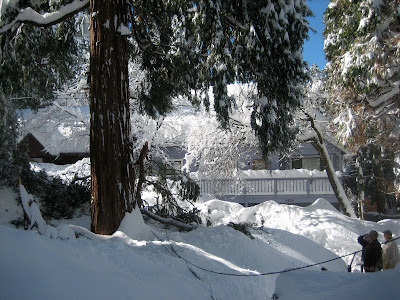 Our phone and power lines. 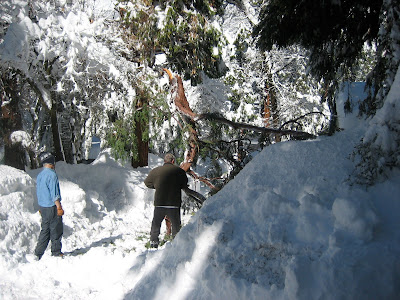 Don and John getting ready to cut the branch up. 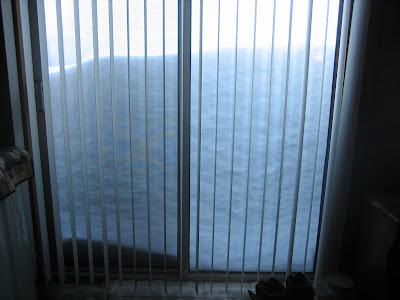 This is looking out our sliding glass doors to the deck. The snow is up to my nose.

Signing off for now - powerless, phoneless, and waterless.