Another Winner from Ruth

If you've been reading my blog for several years, you'll remember that I tested recipes for Ruth as she was preparing for publication of her cookbook, Every Kitchen Tells Its Stories. Some of my favorites were her chili, her chocolate bark, and her sour cream coffee cake.

Last week, Ruth posted a recipe for roasted Italian sausage, along with some mushrooms and potatoes. It definitely sounded like something I wanted to try, so that's what we had for dinner tonight. Oh, MY! It's a keeper - and a new favorite. I've only recently started eating Italian sausage in ways other than my father-in-law's sausage and peppers, and I really like this way a lot.

I made a couple of small changes to Ruth's recipe - I had a half a basket of cherry tomatoes that we needed to use, so I tossed them in there, and I used hot Italian sausage instead of the sweet. I also cooked everything longer - 45 minutes did the trick for us. But the basic recipe is the same as Ruth's. 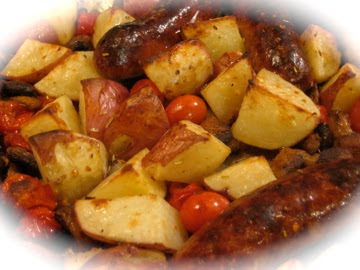 1. Preheat to 400°F/200°C. Drizzle a little olive oil in the bottom of a roasting pan large enough to hold everything in one layer.

2. Toss all the ingredients in the pan and roast until done, stirring occasionally (Ruth's recipe said 30 minutes; I cooked mine for 45)


If you want to get Ruth's fabulous cookbook, which is also available on CD, go here.
Posted by Cyndi at 6:11 PM 6 comments: