One of the blogs I regularly follow is Gina's Skinny Recipes.  I love the things Gina cooks!  Recently she posted this recipe, which I adapted very slightly for us for this morning's breakfast. I think I could eat the whole pan! 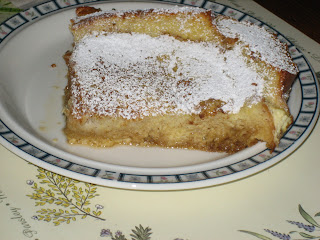 In a small heavy saucepan melt brown sugar, syrup, and butter over moderate-low heat, stirring, until smooth and melted, about 1 minute, then pour into a 13 x 9-inch baking dish coated with cooking spray.
Arrange bread slices in one layer in baking dish, squeezing them slightly to fit.
In a large bowl whisk together eggs, milk, vanilla, 1/2 tsp cinnamon, and salt until combined well and pour evenly over bread. Cover and refrigerate at least 8 hours or overnight.
Preheat oven to 350° F. and bring bread to room temperature.
Bake uncovered, in middle of oven until puffed and edges are pale golden, 40 to 50 minutes.
Top with cinnamon and powdered sugar.
Posted by Cyndi at 11:56 AM 3 comments:

First of all, I can't believe it's been 9 months since I posted those pinto beans. I've really neglected this blog. Now that doesn't mean I haven't been cooking - I have - it just means that I've made things that I've already written about, or I've not been enthused about something new that I made.

Secondly, welcome to my followers!  I didn't even know you existed until I added the "Followers" gadget to the sidebar.  I have had this gadget on my other two blogs for a long time, and have kept up with the doings of my Wanderlust followers for about a year.  I'll have to go visit your sites now that I know you keep up with mine - and I'll add you to my Google Reader so I can see what's cooking.

All that being said, here's a very brief summary of what's happened in my life since that March post:
1. Don and I took a nice Memorial Day trip to June Lake in the Eastern Sierras.
2. Our summer trip was to Colorado - for 62 days. We stayed in Lake City, Taylor Park, Ridgway State Park, and Priest Gulch Campground on the Dolores River. It was a great fishing trip for Don, and a wonderful quilting-reading-relaxing-renewing trip for me.
3. I began my 25th year in education - and my 8th year as the president of our local teachers' union.
4. Don and I took a Thanksgiving trip to Lubbock, Texas, to see my mother. We were surprised by my sister and her husband showing up (they live in Mesquite), and enjoyed a wonderful Thanksgiving feast.
5. We made the very important decision to keep our house after I retire instead of going full-time on the road in our trailer. We love our trailer, and we love to travel, but we also love coming home. If you're going to have to live in southern California, you live in the mountains like we do.
6. We signed the papers to refinance the house and knock $400 of the monthly payment. (More money for travel!)
7. I turned in my papers for retirement - I'm taking advantage of an early retirement incentive. My last day of work will be June 2, 2011.
8. Kenny came home from Japan - he's here for the holidays while he's in transit to his next base. He'll be going to Holloman AFB in New Mexico.

So now we're suffering through one of the biggest rainstorms to hit southern California in a long time - it's been raining since Friday, and is not supposed to quit until Thursday. Luckily for us, it's been rain instead of snow, though the predictions are for it to turn to snow tomorrow night and dump about 2 feet on us.

I've been making other people's recipes lately.  Dinner tonight was Sweetnick's Lemon Parmigianno Chicken, and dessert is Joe's Butterscotch Brownies with Brown Sugar Butter Frosting (only I used half the frosting since it make so much).

Last night, I adapted a recipe for pork tenderloin and used it with pork sirloin.  If you've never had pork sirloin, you should try it. It's much more tender than the pork in boneless pork chops, and is great for grilling as well. Here's the original recipe, which I think is from Taste of Home.

Rub pork with sage. In a large nonstick skillet coated with nonstick cooking spray, brown pork in butter. Place in a foil-lined roasting pan. Bake, uncovered, at 425˚ for 10 minutes.
Meanwhile, in a small bowl, whisk the syrup, vinegar and mustard until smooth. Pour into the same skillet. Bring to a boil; cook and stir for 1-2 minutes or until slightly thickened. Brush pork with 1 T of glaze; bake for 5 minutes. Brush with another T of glaze; bake 3-5 minutes longer or until meat thermometer reads 160˚. Brush with remaining glaze. Let stand 5 minutes before slicing.

Candied Cinnamon and Sugar Almonds
from Melanie of My Kitchen Cafe 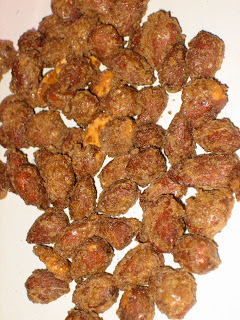 
Preheat oven to 250 degrees. Line a large (11X17-inch) rimmed baking sheet with foil and lightly spray with cooking spray. In a large bowl, beat the egg white until stiff peaks form. Add the water and vanilla and beat again until stiff. Add the almonds to the mixture and stir gently to coat the almonds with the egg white mixture. In a small bowl, mix the brown sugar, salt and cinnamon. Add this mixture to the almonds and stir gently to mix well. Pour the almonds out onto the prepared baking sheet and carefully spread them out into a somewhat even layer. Place the baking sheet in the oven and bake for about an hour, stirring/flipping every 15 minutes, until the almonds look and feel dry.

Mel says: To check to see if the almonds were done, I carefully picked one up in my fingers and when I pressed around it, I didn’t get any wet sugar on my hands. The coating on the almond felt hard and crunchy. Cool completely before serving or packaging.