Here in the USA, flapjacks are pancakes. I was looking through my assigned blog (The more than occasional baker) for this month's Secret Recipe Club, hoping to find some good recipes for breakfast.  Among the categories listed on the side was the heading "flapjacks."  "Oh, goody!" I thought, "pancakes."  I clicked on it, and was taken to two recipes for some bars made of oats with some added sweeteners. "Huh?"  To Google I went, where I learned that in the United Kingdom, "a flapjack is a sweet tray-baked oat bar made from rolled oats, butter, brown sugar and golden syrup."

Okay. That part's easy.  Now, what's golden syrup?  Back to Google. Golden syrup is a light form of treacle, which is a by-product of refining sugar.  It's similar to molasses - and as a matter of fact, several different sites told me I could combine molasses and corn syrup to make a fairly decent substitute for golden syrup.  So that's what I did!

I decided to follow Ros's idea of adding chocolate chips. Ros says it's important to make sure the oat mixture is cooled before adding them so that they hold their shape while cooking. Otherwise they'll just melt into the mixture.

The verdict:  These remind me of chewy granola bars - but better. Don and I really like these - and since they're so simple to make, we'll be trying a couple of variations - peanut butter chips or  raisins and cinnamon are two combinations that come to mind. 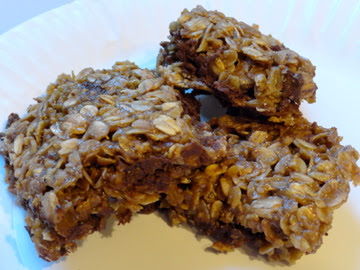 Preheat oven to 350˚. Grease a 13 x 9" baking pan. In a small saucepan, melt the butter with the molasses, corn syrup, and brown sugar. Put the oats in a large bowl and add the butter mixture. Stir to combine, and let cool. Add the chocolate chips and press the mixture into the baking pan. Bake about 30 minutes or until golden brown. Let cool in pan, and cut into squares.