As I mentioned in a previous post, I received an eggplant in my most recent produce pickup. The last time I ate eggplant had to be 28 years ago, right after Don and I were married. I saw a cooking show (yes, there were cooking shows 28 years ago!) where the host breaded and fried the eggplant, and then placed it in a jar in some sort of marinade. It was pressed down, and refrigerated for a day or so before it was brought back out and eaten. It sounded wonderful. It wasn't. I don't remember exactly what was in the marinade, but it turned me off eggplant. I've believed ever since then that I didn't like it. WRONG!

All these wasted years.

I decided I really needed to use the eggplant, and not let it go to waste. I figured the easiest and "safest" way was to fry it. I did the 3-step process (flour, egg/milk bath, panko) and it came out light and crispy. When Don and I tasted the first piece that had cooled enough to eat it, both of us were surprised. His only experience with eggplant was in Eggplant Parmesan - and he didn't like that much at all. Both of us decided this tasted a lot like fried zucchini - only better - and the texture was lighter than zucchini. 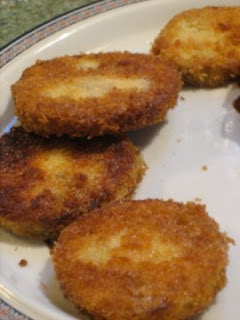 1 medium eggplant (aubergine)
salt
flour (I used white whole wheat because that's all I have, but all-purpose would be fine)
1 egg
1/4 cup milk
1 cup panko crumbs
olive and/or canola oil for frying (to fill skillet about 1/4")

Peel the eggplant and slice into 1/2" thick slices. Sprinkle both sides with salt and let stand for about 20 minutes. Use paper towels to blot the water that is forced out by the salt. Lay out 3 shallow bowls: flour, beaten egg mixed with milk, and panko. Heat the oil over medium-high heat. Dredge each piece of eggplant in the flour, then dip in the egg bath, and the in the panko so each piece is evenly coated on each side. Fry in oil until browned on each side. Drain on paper towels.


The eggplant was our side dish for some chicken thighs. I got the recipe out of Taste of Home's Simple and Delicious magazine, and will make some adjustments before I make it again. Here's the original recipe: 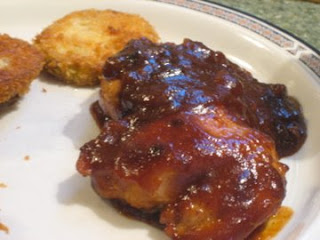 Sprinkle chicken with pepper. In a large skillet, brown chicken in oil on both sides. In a small bowl, combine the remaining ingredients; pour over chicken. Cover and cook 7-10 minutes longer or until juices run clear when cut with knife.

The verdict: too sweet. Next time I'll use unsweetened applesauce (the chunky was pretty sweet), add a little cayenne for spice, and omit the brown sugar. Since we use KC Masterpiece or Bullseye, the barbecue sauce is sweet enough. But overall, the flavor was nice.
Posted by Cyndi at 6:48 PM