Three of the pears from this morning went into this cake - along with dates, coconut, and pecans. I tried to lighten it up a little, by using some Splenda for some of the sugar and cutting out a quarter cup of the oil. I also substituted whole wheat flour for half of the white. The original recipe was supposed to be in a bundt or tube pan, but I'm glad I did it in loaf pans since it came out a little crumbly. That's probably because of the changes I made, as well as the high-altitude baking.

But this is a wonderful, dense, cake - a little like a cross between a fruitcake and a quick bread. 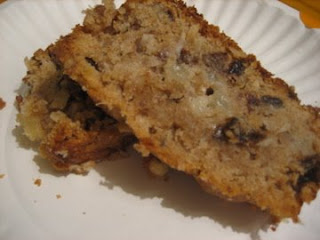 Will also make 2 loaf pans - cook for 1 hour and 20 minutes; check for doneness with toothpick and add another 5-10 minutes as necessary.
Posted by Cyndi at 7:23 PM No comments:

My Introduction to Kale

I think this is the way to begin eating a new food - have it as a part of a recipe. Our basket this morning came with kale, and since I also got a volunteer's share, I came home with 2 bunches. Tomorrow we'll eat the two bunches, but I used a couple of leaves off of one of them for this dish. I was also able to incorporate the mushrooms and 2 of the zucchini from the basket as well. 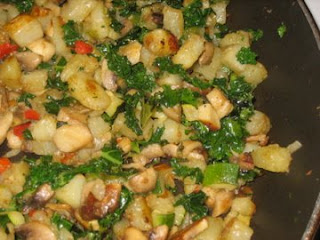 Place oil and butter in a large skillet over medium heat. Melt butter and mix in potatoes, mushrooms, pepper, squash, and shallot. Season with garlic powder, salt, and pepper. Cook 25 minutes, stirring occasionally, until potatoes are tender. Mix kale and sage into skillet. Continue cooking 5 minutes, until kale is wilted. Serve and enjoy!


Don and I really liked this one. We've decided that it will go great with fish (tonight we had it with good ole hot dogs). Now I'm not afraid to try the kale in a recipe that will actually feature it. So tomorrow or Monday, I'll be making something new. Stay tuned!
Posted by Cyndi at 5:56 PM 1 comment:

Pick Up Day at the IEOPBC

Today was pick up day for the Inland Empire Organic Produce Buying Club. Since I was a volunteer, I showed up at 8:45 to our "distribution center," which is really the outside front section of the Artisan Farm Restaurant in Redlands. We needed to set up for 82 shares - so we laid out the baskets all around where we could get to them easily. Around 8:55, a guy delivered 4 cases of avocados, so we went to work putting 4 in each basket. Right after that, the truck pulled up - a guy with a small UHaul trailer. It was crammed full, and it took us about 10 minutes (9 volunteers and organizers) to get it emptied out. Our first task was to go over to where some grates were and get rid off the ice that was keeping the kale and carrots cool. Next, we started putting all the fruits and vegetables in the baskets. 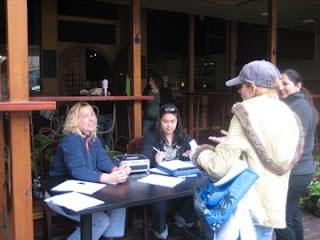 At 10:00, Jei and Joni start checking everyone in (they've been lining up since 9:30), and taking money for the next pick up. 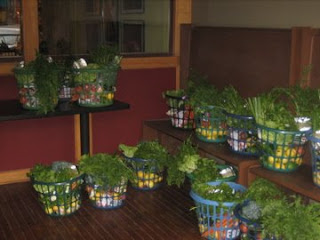 Here are a few of the baskets, ready for pick up now that we've filled them up. 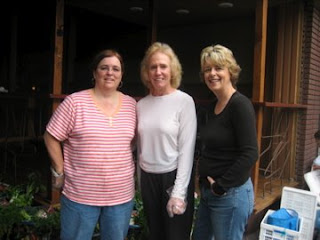 That's me on the left, with Kathy in the center and Susan on the right. I'm really glad I wore an old shirt - this one is filthy! 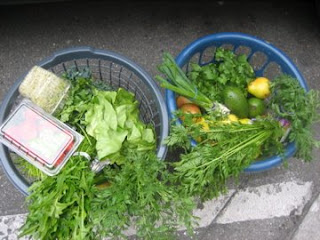 All produce that doesn't get evenly distributed to the shares baskets is divided among the volunteers - a super added benefit for volunteering. The basket on the left is my share, which I paid $22 for, and the basket on the right is my volunteer share, for which I worked 2 hours. I ended up with so much food!

What shall I do with it all? Let's see - I now have two Pear Coffee Cakes in the oven (recipe in another post), I cut up and flash-froze the green onions, and we're eating the kale, mushrooms, and some of the zucchini tonight in a Winter Vegetable Hash (recipe later). I think we'll eat one of the heads of butter lettuce, too. The cilantro is currently drying, so that I can freeze it. I spread it out on paper towels, and will put it on a cookie sheet and flash freeze it. Then it will go in a ziploc bag. The flavor will diminish, but that's fine with me - I don't like fresh cilantro anyway, and will just use this in homemade salsa.
Posted by Cyndi at 2:29 PM 1 comment: 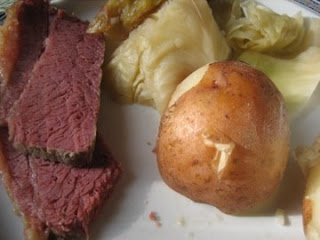 We always have corned beef around St. Patrick's Day - and this year we had it 2 days later. It's one of the easiest meals to make - put the unpeeled red potatoes in the bottom. Next is the meat, and then wedges of cabbage. Add 1 cup of water, and cook on low all day. Perfect. We eat one meal that night, and have enough leftover meat for sandwiches, as well as several days' worth of corned beef hash. The meat for the corned beef hash just goes right into the freezer.
Posted by Cyndi at 2:25 PM No comments:

Going Organic (Produce, that is)

I've always bemoaned the fact that I didn't have a good farmer's market anywhere near where I live, and searches on the internet showed me the closest CSA farm is in San Diego (3 hours away). On Monday, the superintendent's secretary told me about the Inland Empire Organic Produce Buying Club. Not only did I join, I'm now a volunteer! On Saturday, I'll show up at 8:45, and help distribute this week's produce. I'll go home with a basket of my own - so you can start seeing pics of the produce I take home, as well as what I make with it. I hope to find some great recipes on my blogging friends' sites to use.
Posted by Cyndi at 2:17 PM No comments:

A new way to use ground beef

I have about 80 blogs I follow on Google Reader, most of them cross stitch or quilting blogs. The other day, one of them (I cannot remember which one) mentioned loose meat sandwiches. Huh? I thought these were sloppy joes. Wrong! Sloppy joes have a tomato-ey sauce - these have no sauce at all. I did a little research and found several different recipes, and learned that loose meat sandwiches are common in Iowa and Missouri. With a little tweaking for my own tastes, and wanting to still stay as true to the recipes I found, I came up with this one. We will definitely be having this again! 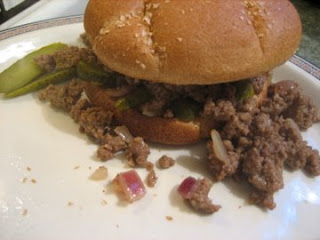 ½ teaspoon salt
½ pound lean ground beef
½ small onion, chopped
1 ½ teaspoon prepared mustard
1 ½ teaspoon white vinegar
1 ½ teaspoons sugar
½ cup water
salt and pepper to taste
Sprinkle the bottom of a heavy medium skillet with salt, and preheat the skillet over high heat. Break the ground beef up into the skillet and add the chopped onion. Cook the meat, breaking it up into smaller pieces as you go. The meat must end up being cooked into small crumbles. When meat is browned, add mustard, vinegar, sugar, and water. Reduce heat to medium, and continue to cook until water has cooked off, about 5 minutes. Add salt and pepper to taste. Toast the hamburger buns if that's the way you like them, and prepare them with some mustard and dill pickles. Add a good amount of the meat (this recipe will make enough for three sandwiches) and enjoy.
Posted by Cyndi at 7:12 PM No comments:

This has some my favorite flavors - Jimmy Dean sausage, eggs, cheese, onions, and mustard. I've made something this in a different form before - using an 8" round pan so it was like a casserole. I've been making a few things in my silicone muffin tins lately for two reasons: 1) each serving gets a tasty crunchy outside, and 2) I can make how ever many of them that fill up - rarely does every recipe I try come out to make exactly 12 of something. Now I have some leftovers, and I think they'll heat up just fine in the microwave at the office. 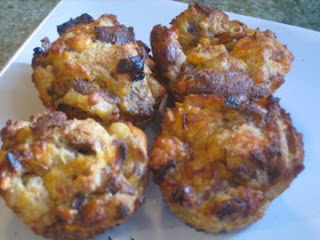