The Need for Comfort Food

All of us know how it is - we get stressed, and we turn to comfort food to help ease the stress. Last year, for a long time, I wrote about the long negotiations crisis we were going through at work. Now we're going through something just as critical, just as stressful, yet even worse for a few of my members. Due to the budget crisis California is going through, partly due to the housing market, and partly due to our totally ignorant and inept governor, our district decided to cut some of its budget by laying off teachers. On Friday, I sat with 5 of my members as they received the notice of layoff - with 6 more to do tomorrow and 6 on Friday. This is heartbreaking. Things are already tough enough in this state, and these people now have to worry about whether or not they'll be able to feed their families.

I think I'm looking forward to the end of Schwarzeneggar's term as governor almost as much as I'm looking forward to the end of GWB's reign of ineptitude as president. I hate paying taxes as much as the next person, but for crying out loud. How do you think you got that paved highway? The teachers in your school? The police who protect your community? I will gladly pay more taxes to have California become a nice place to live again.

For those of you who don't live in California, we're now number 47 out of 50 in pupil spending. And THIS was supposed to be the governor's "Year of Education." Hah!


On to the good stuff:

This morning I made one of Don's favorite breakfasts - German Pancakes. They're so easy - and so delightfully yummy! 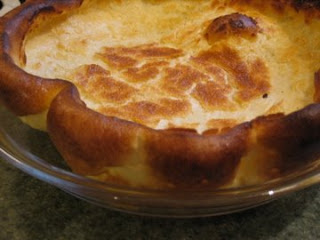 Preheat oven to 425˚. In an ovenproof 10" skillet or pie plate, melt the butter. In a large bowl, beat the eggs with an electric mixer on high until fluffy. Gradually add flour and continue to beat on medium. Slowly add milk and salt. Pour into skillet or pie plate, and put in oven. Cook 13-16 minutes until puffed and golden. (It should look like the one above). Serve immediately, topped with powdered sugar, almonds, and jam. (Below) 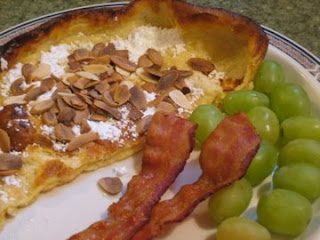 Dinner was burgers. Instead of making the usual beef hamburgers, though, I used a recipe from Cooking Light that offered a great change from beef. We were able to cook these on the grill since we used the vegetable grill pan - looks like a square skillet/basket with holes in it. 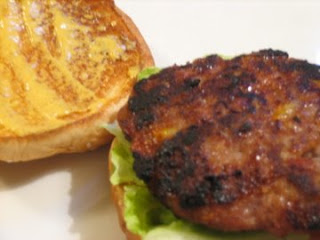 3/4 lb. ground turkey
1/4 cup bread crumbs
2 tablespoons orange marmalade
(the recipe calls for your choice of jams - I don't think one of the red or purple ones would have been good, but I'm sure apricot would be just as good as the orange.)
2 tablespoons mayonnaise
1 teaspoon curry powder
1 teaspoon lime juice
hamburger buns
lettuce

That's really disturbing. I do work for our Dept of Ed and with NCLB and all of the extra work that goes along with it, you would think the last thing they would do is cut back on teachers.

I'd be really pissed at your gov., especially since he and his supporters orchestrated the recall coup that got him into office and then did not really do anything to help the situation. Cutting back on teachers is really short sighted.