Every once in a while I get some time to peruse the recipes on foodtv.com. My favorites usually come from people like Rachael Ray, since they're easy, they're made with ingredients I often have, and many times they're done in 30 minutes.

This one caught my eye because I love chicken piccata, and the idea of a one-dish meal sounded good. (I also think any kind of new potatoes are divine!). I had an Italian potato salad once at Matano's Little Italy (a deli in Yucaipa), and liked the fresh green beans that were in it.

When you make this, be prepared for the contrast between the warm chicken and the cold/cool potatoes and green beans. Once I was mentally prepared for that, it was wonderful. This will be a repeat in our house! 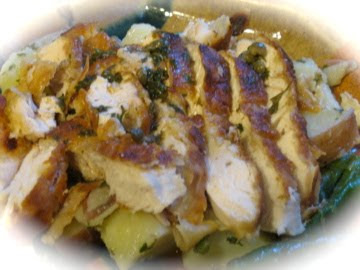 1. In a large saucepan, add the potatoes and enough salted water to cover by 1 inch. Bring to a boil and cook until almost tender, about 10 minutes. Using a slotted spoon, transfer to a colander. Add the green beans to the boiling water and cook, stirring, for 2 minutes. Drain in the colander with the potatoes; let cool slightly.
2. In a large bowl, whisk together 1/4 cup olive oil, 1 tablespoon capers, 3 tablespoons parsley, the lemon peel and half of the lemon juice. Add the potatoes and beans and toss; season with salt and pepper.
3. In a shallow bowl, beat the egg. In another shallow bowl, season the flour with salt and pepper. In a large nonstick skillet, heat the remaining 2 tablespoons olive oil over medium-high heat. Coat the chicken breasts with the seasoned flour, then dip in the egg, allowing any excess to drip off, and coat with the flour again, shaking off the excess. Add to the skillet and cook, turning once, until golden, about 8 minutes. Transfer to a cutting board and cut into strips.
4. Add the chicken broth to the skillet; cook over medium heat, scraping up any browned bits. Remove from the heat and stir in the remaining 1 tablespoon capers, 1 tablespoon parsley and lemon juice. Top the salad with the chicken and drizzle with the pan sauce.

The next dish was one we had twice this week - once on Tuesday, with some turkey burgers, and then again on Friday with some fish. It makes a LOT, so we still have some leftovers. I saw this in this month's Everyday magazine, and since we like jalapeño poppers, we thought this would be good. It was. I wish it were "gooey-er" though. Don't skimp on the peppers - they might look like a lot when you chop them up, but the cooking lessens the intensity of the capsicum, and I wish I'd added an extra jalapeño. 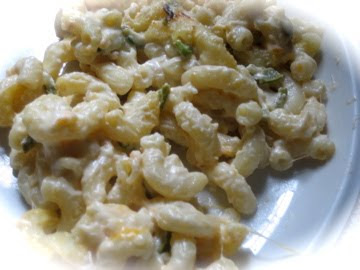 Bring a large pot of water to a boil, salt it, add the pasta and cook until al dente. Drain and return to the pot. In a skillet, heat a drizzle of EVOO over medium heat. Add the jalapeños, serranos and garlic and cook until tender, about 5 minutes. Add to the pasta. Preheat the broiler. In a saucepan, combine the milk, cream cheese and onion over medium-low heat. Cook, stirring, until smooth, 5 minutes; stir into the pasta. Stir in the jack cheese; season with salt and pepper. Transfer the pasta to a baking dish and broil until browned, about 3 minutes.