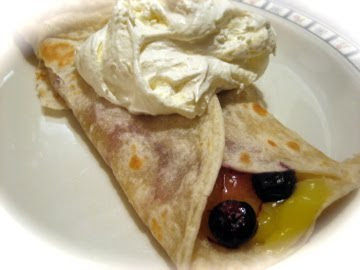 I have two inspiration sources for this recipe:
1) Sandra Lee has a new show, and while I'm not a rabid fan, I do like the concept of her show. She takes her "semi-homemade" touch and applies it to cooking inexpensively. I've watched two episodes, and in one of them, she made some apple "pies" using tortillas, peanut butter, and apple pie filling. (In my opinion, if I were to make them, which I probably will, I'll substitute some cream cheese for the peanut butter.)
2) I had some crepes at a food stand during the quilt show in Sisters, Oregon, last month, and they had this filling.

1. Cook some flour tortillas (the kind you can get at Costco that are uncooked) until very lightly browned. I suppose you could use regular tortillas, and heat them slightly until they're pliable.
2. Spread each one with a couple tablespoons of canned lemon pie filling.
3. Top the pie filling with a small handful of fresh blueberries (thawed from frozen will do, too).
4. Roll up the tortilla, and top with some sweetened whipped cream. I use Sugar-Free Cool Whip.

Note: I bet these would be even better with some of the lemon curd you can get at Trader Joe's.
Posted by Cyndi at 6:44 PM

That sounds simple and tasty :o)