It looks like the roundup will be rather small tonight, but there will still be some excellent recipes here. 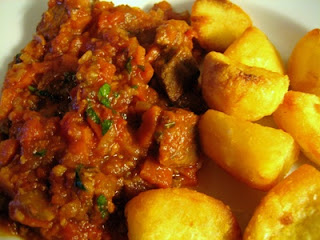 First, we're joined by Pamela of Posie's Place, who gives us The Best Stew Recipe. It's a Jamie Oliver recipe! I love Jamie Oliver, and this one looks great. 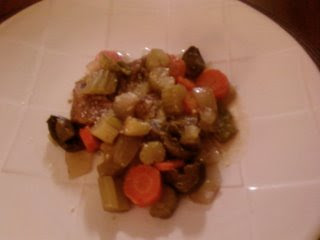 Next, Chris from Mele Cotte sends in Mushroom Beef Stw, made in her crockpot after she saw a link she liked on Kuchenlatein. 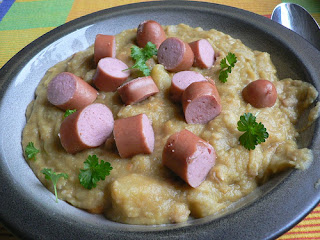 Speaking of Ulrike, she decided to try out her crockpot and made a hearty German Pea Soup. Notice that this has what looks like hot dogs in it. Well, I can assure you, they're not hot dogs. They're wiener, or Viennese sausages, which are often found in hearty soups like this. 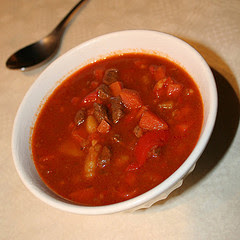 From another city in Germany, Hamburg, Petra from FoodFreak sends in another great soup, Goulash Soup I remember goulash soup being one of my favorites when we ate out in Germany. It's nice to have a recipe now so I can make my own!

My contribution tonight is some Turkey-Vegetable Barley Soup. I started with a recipe for Beef Barley Soup, added mixed vegetables, and substituted ground turkey for the ground beef. This was excellent. The tomatoes and tomato sauce made it much better than we expected. I made this a couple of days ago, and as it sat in the refrigerator, the barley soaked up a lot of the broth, and it turned into a stew. 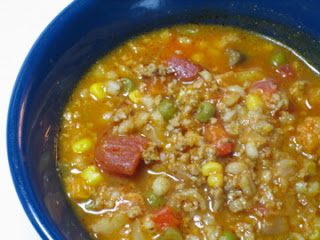 I won't be posting for a couple of days. We're going to Anaheim this weekend. I'm helping host a small leadership conference at Disney's Paradise Pier Hotel. I'll let you know how it goes when we come back!
Posted by Cyndi at 7:49 PM

Thanks for the round-up and the explanation. Not to say Wiener or Viennese sausages are a must for most people in a pea soup

Thanks for hosting again! This is fab!

I just couldn't fit in a soup or stew this week but I should have one next week.

These all look yummy but those Vienna sausages intrigue me the most. I've never tried them.