I guess people are pretty busy, or they're not fixing soup - we have a small roundup tonight. That's okay! 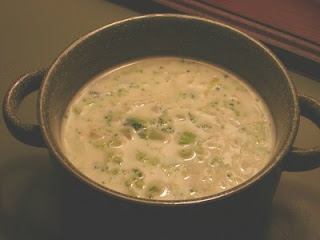 First up is Paula of The Cookbook Junkie, who sends a Cheesy Broccoli Soup from The New Holly Clegg Trim and Terrific Cookbook. Never heard of Holly Clegg? Me neither. Paula explains, "Poor Holly Clegg. No one has heard of her. Well, one person. Supposedly she's been on a couple of the national morning news programs and she's contributed recipes to many magazines. She's written six cookbooks and has her own website. There's a press item on her site that says that WebMD named this cookbook one of the top 10 healthy cookbooks. 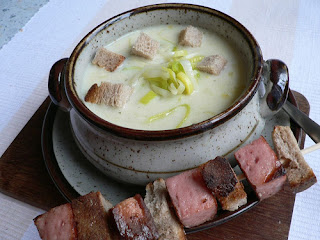 Next up is Ulrike of Küchenlatein, who sends in a soup I just HAVE to try: Lauchsuppe mit Leberkäs-Spiessen, or Leek Soup with Leberkäs Skewers. What makes this stand out to me is the skewers. Leberkäse is similar to bologna, but tastes much better. I buy it often at the German market near my office, and I use it two ways: in Fleishsalat, or cut in thick slices and fried (then put on a sandwich). I like how Ulrike took cubes of crusty German bread and skewered them with cubes of leberkäs, after browning them in a little oil. What a clever and attractive presentation! 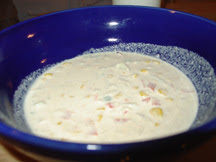 Heather of Eating for One contributes Mexican Potato Soup. This is a unique take on potato soup, since it also has corn, bell peppers, cilantro, cumin, and jalapenos. Heather says she got the recipe from USA Today, where occasionally you can find some good ones. 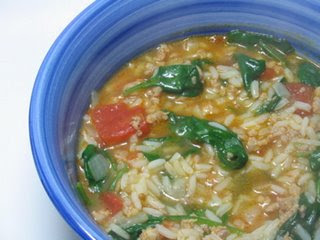 What did I make? I made a soup I've tried before and really liked, Italian Sausage and Spinach Soup. One thing I did differently this time was add a pinch of crushed red pepper with the broth. It gave it a good taste, but wasn't enough to make it hot.

Yes, it's obvious that you understand the German cuisine. Thanks for your great explanation and the round-up!

I'm afraid I haven't been making soup recently, but if I were, I'd like to serve it in Ulrike's soup bowl!

I just made a recipe from Anna at Morsels and Musings: Mussels with leeks, spinach and blue cheese. Didn't photograph it since I was at a friend's house, but check it out. It's delicious!

I'm going to get organized and make stew this week! I'll write it on my forehead with a magic marker!