Announcement: Join Me on Thursdays for Soup or Stew! 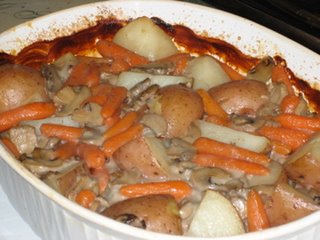 This idea of mine isn't really my idea at all. It started, for me, at Kuchenlatein, where Ulrike wrote about all the soups she cooks. She's got some GREAT recipes, and I plan to try some of them. Ulrike refered to this post on 101 cookbooks, where Heidi makes a suggestion to "Designate a soup night once a week. You could actually cook your way through fifty new soups in one year." Gee, I thought. Why hadn't I thought of something like that? Don loves soups and stews, and when I asked him what he thought about this idea, he thought it was great. So I picked Thursdays.

Why Thursdays? Well, I'm almost always home. School board meetings are Tuesdays, Rep Council and Exec Board are Wednesdays, and Mondays are...well, nothing. But Thursday mornings I can put meals in the crockpot if I want to, or I can plan on a meal for that night, so I went with that.

If you're interested in joining me, I would be glad to do a roundup. What fun! Just send a link to your post by 7:00 pm Pacific Time to cholmaneee@uiadotnet.

I'll start this week with some stew. I made this recipe for the first time TWENTY-SIX YEARS ago! There's a good story (in my opinion) behind it, so I'll try not to bore you: I was fresh out of college, a 2nd Lt. in the Air Force, stationed at Rhein-Main Air Base, Germany. I had just started dating Don, who I met after a football game Labor Day weekend. (He played nose guard on the base team). I decided to invite him for dinner, and figured something basic, a meat-and-potatoes dish, would be a good idea. I also figured that I would have some really good leftovers. I threw this together, put it in the oven for 3 hours (which ISN'T too long), and proudly served it to him along with a salad and some green beans. He ate every bite. He asked for more, and I blithely said, "Help yourself." He finished it off! No leftovers for me! I knew that if I was going to be cooking for him again, I needed to revise my serving sizes upwards to feed a hungry football player. But I also learned that he loved my cooking, and it was the beginning of a wonderful relationship between a girl who liked to cook and a guy who liked to eat. Very seldom does he tell me he doesn't like something. When he does, it's something I usually don't like either. In more ways than one this has been a fabulous marriage.

Now on to the recipe: 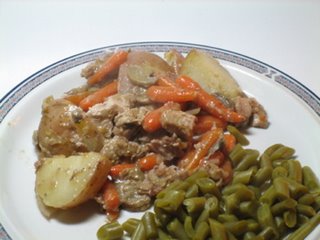 Layer meat and mushrooms in a large casserole dish. Sprinkle with dry onion soup mix. In a large bowl, mix together the poatoes, carrots and soup, and spread add to dish. Cover tightly and bake at 300˚ for 3 hours.

You might think that the two soups would make this dish salty, but they don't.

Let's do this again next Thursday. A soup or a stew! Join me!

You put it into practice! Great job, every now and then I'll probably join in!

Great idea! I'll be there.