A Day of Adaptations and Good Eating

One of the things I like to do is experiment with old, established recipes (and new ones, too) and try to make them healthier. Sometimes I try a baked goods recipe with whole wheat flour, or I’ll substitute Splenda or Splenda Brown Sugar Blend for granulated and brown sugar.

First up today was breakfast, and I worked on my recipe for pfannenkuchen , also known as crepes. Instead of white all-purpose flour, I used half white whole wheat and half regular whole wheat. I used Splenda instead of sugar, and then sprayed the pan with butter-flavored Pure (a cooking spray by Mazola) instead of using a teaspoon of butter for each crepe.

Whole Wheat Pfannenkuchen
this recipe makes about 20 crepes, so you might want to cut it in half

Beat eggs well. Add salt, Splenda, and vinegar. Add flour and half of the milk, stirring until smooth. Gradually stir in the rest of the milk to make a creamy batter. Heat a large nonstick skillet until drops of water dance on it. Spray with butter-flavored nonstick cooking spray. Add about 1/3 cup of the batter. With a quick rotary motion, tip skillet to spread batter thinly. Brown only lightly on each side. To serve, roll up with your choice of jams.

Since it was a holiday, I was able to get a little time in on the computer for fun, so I visited cookinglight.com. There’s a great discussion going on right now about grilled cheese sandwiches, which helped me come up with a use for the leftover pita bread in my freezer. 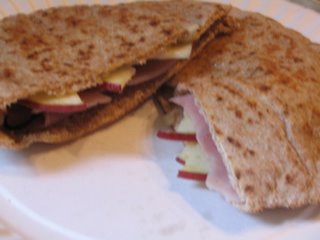 Fill each pita half pocket with one slice of Swiss cheese, half a slice of ham, and several apple slices. Spray each side with nonstick cooking spray and grill until lightly browned on each side and cheese begins to melt. Makes 6.

*******
Next up was a pie. I’ve had some Pillsbury pie crusts in my freezer for a while, and decided to use one of them for a coconut cream pie. I haven’t made pie in a while since it’s been such a pain to use foil on the crusts to keep them from burning. Yesterday I bought a pie crust shield at Bed, Bath, and Beyond, and it’s the answer to the problem. It just slips onto the pie crust and protects the edges while the pie bakes, keeping the edges from burning.

I got this recipe in 1976 from a woman named Susan White, who lives in Knox City, Texas. I was visiting a guy I was dating, who was trying his hand at pig farming. He, his friend Bayless, and the Whites all lived in a former hotel, and Susan had the run of a pretty good-sized kitchen. One of my most distinct memories of this visit was eating fresh, and I mean fresh, sausage from a sow that I’d seen a few days before. But the pie was fabulous, and I’ve had that recipe for 30 years. It’s one of DH’s favorites. Most coconut cream pie recipes I’ve seen lately use coconut milk. This one doesn’t, and is much like my mother’s pies, made from a custard that’s started from scratch. 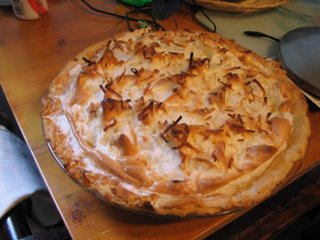 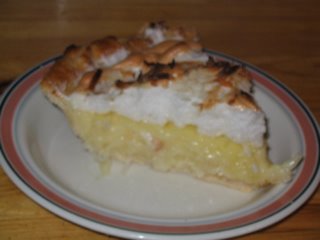 In saucepan combine sugar, flour, and salt. Mix well. Gradually stir in milk. Cook, stirring often, over medium heat until bubbly. Cook and stir for another 2 minutes. Remove from heat. Separate eggs, putting yolks in a small bowl and the whites in a small mixing bowl. Take small amount of this mixture and stir into bowl with egg yolks; mix well. Immediately return to hot mixture, cook 2 minutes, stirring constantly. Remove from heat. (If mixture is too lumpy or egg yolks have separated, beat with rotary or electric mixer.) Add butter and vanilla, then coconut. Pour into cooled pie crust. Spread meringue on top. Cook at 350˚ for 12 to 15 minutes. Cool. Can sprinkle a little coconut on top of meringue before cooking.

The fish I cooked for dinner is an adaptation of a Cooking Light recipe, which originally called for habañero chilies. Have you ever eaten habañero? It’s way too hot for me, so I substituted jalapeños. I don’t even remember what kind of fish was in the original recipe–I used another package of the barracuda that DH brought home from when he went ocean fishing. This is a fabulous recipe! The jalapeño was just hot enough–I can imagine that if I'd used habañero it would have been too hot. 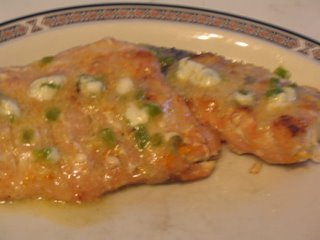 In a bowl, stir together vegetable oil, orange juice, 3 tablespoons lime juice, tequila, 1 tablespoon lime zest, 1 tablespoon jalapeño pepper, and garlic. Reserve a small amount to use as a basting sauce, and pour the remainder into a shallow baking dish. Place the fish in the dish, and turn to coat. Cover, and refrigerate for 2 to 4 hours, turning frequently. In a small bowl, mix together softened butter, garlic salt, 1 tablespoon lime juice, 2 teaspoons jalapeño pepper, and 2 teaspoons lime zest. Cover, and refrigerate.

Preheat grill for medium heat. Lightly oil grill grate, and place fish on the grill. Cook fish for 5 to 8 minutes per side, or until the fish can be easily flaked with a fork. Baste occasionally with reserved sauce. Transfer to a serving dish, top with jalapeño butter, and serve.

Another Cooking Light recipe was used for tonight’s side dish. I didn’t have any Yukon gold potatoes, though, so I used white potatoes. I also cut the recipe in half, since DH and I didn’t need a full recipe. Too bad I can't have a lot of potatoes–this was so good I could have made a full recipe and eaten ALL of it! 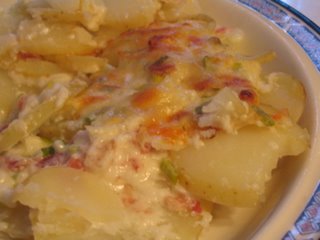 Preheat oven to 350°. Place potatoes in a large saucepan; cover with water. Bring to a boil. Reduce heat; simmer 5 minutes or until potatoes are almost tender. Drain. Sprinkle potatoes evenly with 1/4 teaspoon salt; set aside and keep warm. Heat a medium saucepan coated with cooking spray over medium heat. Add shallots; cook 2 minutes or until tender, stirring frequently. Sprinkle flour over shallots. Gradually add 1/2 cup milk, stirring with a whisk until well blended. Gradually add remaining 1 1/2 cups milk, stirring with a whisk. Cook over medium heat 9 minutes or until thick, stirring frequently. Remove from heat; stir in 3/4 teaspoon salt, Asiago, chives, pepper, and bacon.
Arrange half of potato slices in an 8-inch square baking dish coated with cooking spray. Pour half of cheese sauce over potato slices. Top with remaining potato slices and cheese sauce; sprinkle with Parmesan. Bake at 350° for 35 minutes or until cheese is bubbly and lightly browned.

You're really cooking up a storm there, girl! Good goin'!