Back in Janaury, I wrote this post, where I first learned about Australia's Donna Hay. Tonight I decided to make one of her chicken recipes, and chose a very simple one that I could throw together quickly and cook in the oven. 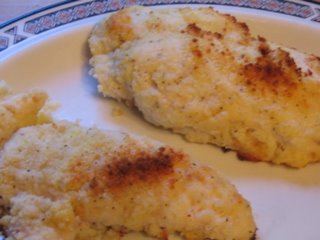 Preheat oven to 390˚. Line a baking tray with baking paper. Dip the chicken breasts into the egg whites, then toss in the combined Parmesan and pepper to coat. Place in the baking tray and cook for 15 minutes or until the chicken is golden and cooked through.

Since I have re-dedicated myself to cooking as low carb as possible (though sometimes you just gotta have some potaotes!) I made roasted broccoli and stuffed tomatoes. The first time I'd ever thought about roasting broccoli was when Kalyn posted her recipe for Garlic Roasted Broccoli. I've always wanted to give it a try, but had to wait for cooler weather since I didn't want to use the oven during the summer. I chose not to use the garlic this time, though I will the next time I make this. While the recipe below says the oven should be at 400˚, I used the same temperature (390˚) this time that I used for the chicken.

Preheat oven to 400˚. Trim broccoli and break into florets. Toss with olive oil and salt, and spread on a baking sheet. Roast 15-20 minutes. Serves 2.

The other side dish this evening was stuffed tomatoes. I always keep some cooked brown rice in the freezer, and pulled out a small chunk (about 1/3 cup) for this recipe. I also used frozen spinach. 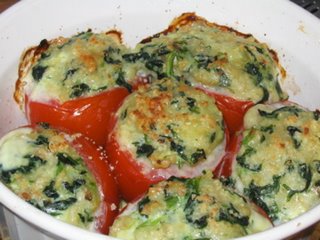 Preheat oven to 400˚. Cut tops off tomatoes. Using a spoon, scoop out the insides and discard. Sprinkle lightly with salt and turn upside down on a paper towel to drain for about 10 minutes. Combine remaining ingredients, and fill tomatoes. Top with a little more Parmesan. Bake 15-20 minutes.

So, you can see that the cooking time for tonight's dinner was 15-20 minutes - in my oven, it was all ready at 18. Later, I'll make a couple more of yesterday's Chocolate Lava Muffins for dessert!

Cyndi, those tomatos look gorgeous. I've never had roasted broccoli, have you tried roasted cauliflower? It's very nice too.

What a great-looking meal! I have to try that chicken recipe. I recently discovered BJs individually frozen chicken tenders at $2.50/lb. I'm normally a dark-meat gal (bring on da fat!) so I'm psyched to fnd a white meat that's moist and yummy. This recipe is going to be used at my house this week, for sure. Thanks, Cyndi!