Five Things to Eat Before You Die 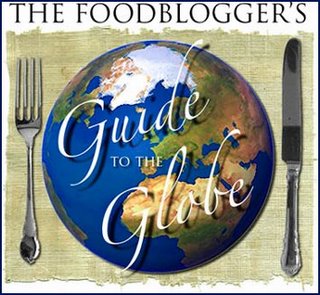 I was recently tagged by cookiecrumb of I’m Mad and I Eat and Christine of Christine Cooks for a fabulously fun meme - “Five Things to Eat Before You Die.” Melissa of The Traveler’s Lunchbox started it, asking food bloggers to recommend "things you've eaten and think that everyone should eat at least once before they die." What fun. Cookiecrumb took the angle of listing things to put on a “to do” list, including truffles, squirrel, tripe, and jellyfish tentacles. Christine made her list one of foods that she had eaten, and felt that others should put on their “must do” lists. I think I’ll try the second version. I mean, if I haven’t eaten it yet, there’s got to be some pretty good reasons why! I mean, I have NEVER had sushi of any kind, and have no interest whatsoever in eating it. Don’t even try to convince me. It just won’t happen. 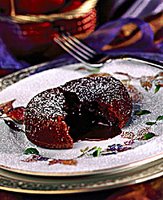 1. Chocolate Lava Cake, like the kind served at McCormick and Schmick’s in Irvine, California (and other locations) If you’re a chocolate lover, this has got to be the best dessert in the world. It’s cake, but it’s molten fudge. It’s just sinful. And I get to have one next weekend! (My executive board is having its retreat in Irvine, and our Saturday night meal will be at McCormick and Schmick’s.) 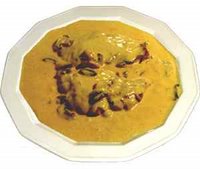 3. My mother’s Burnt Sugar Cake. How do I describe it? It’s a Floyd family heirloom, passed down from my grandmother Alma Adams Morlan. For both the cake and the frosting, you start by caramelizing some sugar. The frosting hardens almost to the consistency of fudge, and all of us (my 5 brothers and sisters and I) eat the cake first, leaving the “m” shaped frosting for last. It’s mandatory for Mom to make this cake for any and all family functions. We’ve scattered to the corners of the continent, and seldom make it ourselves, since we will never be able to make it like Mom does.

4. Raclette. Another food I swoon over, especially when it’s made with bananas, potatoes, bacon, and mushrooms. Raclette is a kind of cheese found in Switzerland and France. It has a strong, almost odorous, scent to it when it’s uncooked, but once it’s heated and melted, the scent goes away and you’re left with a delicious flavor. I first had raclette at our neighbor’s house (Egon and Christina) in Waldorf, Germany. Christina had a raclette grill–like this one:

She laid out sliced boiled potatoes, sliced bananas, mushrooms, cooked bacon, and small gherkins, and we gathered what we wanted and covered it with slices of raclette. We then put our own personal pan into the grill, where the cheese then melted all over the rest of the food. The combination of flavors is addicting, and I ate until I was almost sick. The next time I had it was at a small cafe in Zermatt, Switzerland, where it was served the traditional way : the wedge of raclettepis warmed next to a heat source such as a fire, and then the melted cheese is scrated off onto the food on the plate. 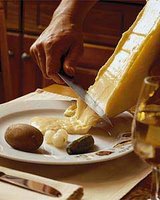 When we returned to the states, I did without raclette until I came across it at Trader Joe’s. I also found it at Whole Foods, so it’s not a distant memory any more. DH doesn’t care for it often, but I sometimes make enough of the potatoes to be able to take some to the office now and then and eat it for lunch, after cooking it in the toaster oven.

5. Calves Liver with Pancetta and Onions from James’Beach in Venice, California. I grew up eating calves liver, but Mom always cooked it with sautéed onions. It wasn’t until I was married that I had it with bacon. At James’ Beach, they serve it with both, but they use rounds of sliced pancetta instead of bacon. Yes, this is a high-calorie dish, but so is lava cake!

So there you have it. I could think of more, but these are the ones that my taste buds and my memory claim as my top five.
We're supposed to tag 5 more bloggers for this, so I found 5 that I don't think have posted about this yet.

Ulrike of Kuchenlatein in Kronshagen, Germany
Nerissa of Deetsa’s Dining Room in Waglisa, British Columbia
Pat of Up a Creek Without a PatL in New England
Pamela of Posie’s Place in Basel, Switzerland
Anthony of Anthony's Kitchen in Mumbai, India

Great choices Cyndi and thanks for the tag, you'll find my selection here:

Snap!! Raclette was one of my choices too!!

Great choices! I love liver, but I am the only one in my family that does. That version with pancetta and onions sounds great!

These all sound fantastic! I've never made raclette at home but I should try it! And I'd never even heard of rahmschnitzel but it looks divine. Wonderful choices!

Hey, Cyndi, thanks for the tag! I was feeling a little left out. :o( It will be fun thinking of five recommendations. Yours are certainly interesting! Your experiences in Germany always give you something a little different to post about.

Too bad about the sushi. I guess that's one food that you either love or hate, no in betweens. I love it; it's my choice for my birthday dinner at least 5 times out of 10!