Some Texas Barbecue for a Snowy Day

More snow. Ack. I've had enough. It's April! It started snowing last night, and DH and I woke up to over a foot on the ground. We spent most of the morning after breakfast shoveling the steps, the driveway, around the two vehicles, and then the huge berm put up by the snowplow. My wrists and back are so sore! We broke for lunch, and it started snowing again. Around 4, DH went out and shoveled again until dinner, but it hasn't stopped snowing. There's another foot. It's supposed to stop tonight. I hope so. DH has got to go to Las Vegas tomorrow, and I have a lunch date with my daughter.

Yesterday I started on tonight's dinner. Normally I take three days to do a barbecue brisket, but decided to shorten the process since I was able to start the cooking so early this morning. If you've never done a barbecue brisket, Texas style, here's the way to do it in a regular oven.

Day 1: Sprinkle both sides of the brisket with garlic powder, onion powder, and celery salt. Place in a marinating dish, or a bag, or a Foodsaver marinating canister, and sprinkle with liquid smoke. This is a liquid sold under several different brand names. The one I have is called Wright's Hickory Seasoning Liquid Smoke, and comes in a 3.5 oz. bottle. Use about a third of the bottle for a 1.5 pound brisket, two thirds for a 3 pound brisket, and the whole bottle if you're doing a huge cut of meat. Seal bag or canister and marinate in the refrigerator at least overnight.

Day 2, early morning: Sprinkle brisket generously with Wocestershire sauce. For my 1.5 pound brisket, which is a small one, I used about 3 tablespoons. Place in a baking dish and cover with foil. Bake for four hours at 275˚. Remove from oven, let cool for about an hour, and then place, still covered, in the refrigerator. 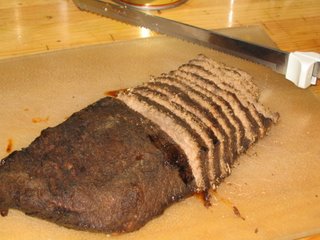 Day 2, 45 minutes before you want to eat: Remove brisket from pan and put on cutting board; slice thinly across the grain. It will seem tough, but it softens to a wonderful tenderness when it's reheated. Lift congealed grease from baking dish and discard. Put meat back in pan, and cover with about 1 cup of prepared barbecue sauce. I use either Bullseye or K.C. Masterpiece, since they don't have that raw sour taste that Kraft and Hunt's do. It's up to you. 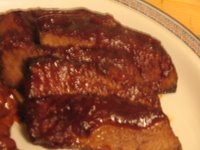 We always eat this with my mother's potato salad and baked beans.

Boil the potato in its skin for about 25 minutes, or until knife inserted in potato goes through easily. Let cool. Peel and dice into a bowl. Add remaining ingredients and stir to mix. Makes about 4 servings.

Combine in a baking dish; cover tightly and cook at 350˚ for at least 30 minutes.

This looks like something my man would dig. The few times we had a layover in Texas he looked like he'd died and gone to heaven when he saw the local menus of beef, beef and beef.

I'm stumped that you got snow in Texas today. Now I feel even more lucky at the warming-up spring weather here in Western Canada.

Ooops... So you are in California. I guess it doesn't pay to write comments when you're half asleep, eh?
Thanks for dropping by my place. I'll add you to my list too.

that brisket looks good! I have been thinking of trying a brisket as I have one in the freezer to use. thanks for posting!
Glad you made it home safe.

I made a pot roast like your brisket once and it turned out great but wasn't very flavorful. Next time I make it (or brisket) I'll try your marinade idea because I always forget I have liquid smoke in my cupboard. Thanks for reminding me!