From Switzerland: Witches, Gadgets, and Geschnetzeltes 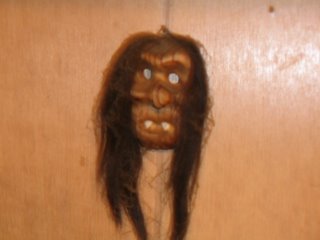 When we were stationed in Germany the second time, my husband gave me as an anniversary gift a trip to Switzerland. By myself. He had gone to Spain for a week to do some fishing with some buddies from work, and I had to deal with work and two toddlers all by myself. He felt guilty, as men do, and bought me a Swiss Rail pass, a train ticket on the German rail system to Switzerland, and a stay at a nice hotel in Interlaken. I was so excited! I was in a nice hotel on the banks of a river (I forgot the name) and within walking distance of a couple of nice restaurants and the train station. With my Swiss Rail pass, I could go anywhere I wanted on the Swiss public transportation system, to include the boats that travel across the lakes on either side of Interlaken. I took several wonderful day trips from Interlaken. First, I went to Basel, where I did some shopping and wandering around the historic sites. Another day I went to southern Switzerland to the beautiful little town of Zermatt, in the shadow of the Matterhorn. I remember having a lunch at a sidewalk café of raclette (a special cheese meant to be melted and served over potatoes, pickles, and sometimes mushrooms and bacon). Another day took me up the side of the huge mountain massif that looms over Interlaken to Grindelwald, and then from there up inside and to the top of the Eiger (famous from that Clint Eastwood movie, The Eiger Sanction. One of my favorite souvenirs from Switzerland is my kitchen witch. She’s supposed to be a good luck token, and she hangs over my stove, making sure that I always produce good food. 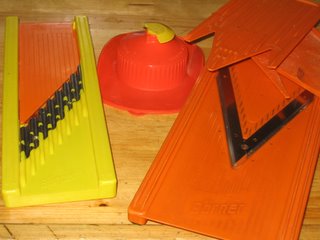 My absolute best souvenirs from Switzerland, however, are my Börner V-Slicer and Waffle-Cut Machine. The V-Slicer is really a mandoline, though it cost a whole lot less. It makes slices two different thicknesses, great for onions and potatoes, as well as small juliennes and larger ones (as for french fries). In the photo, it’s on the right. I bought my first one back in 1980, when I was first stationed in Germany, and wore it out after 6 years. I bought another one on my trip, and I still use it. It’s lasted longer than the first one, though the food holder, the thing in the middle of the picture, is starting to fall apart. On the left side is the Waffle-Cut Machine, also by Börner, and it’s what I used to make my cucumber salad. It can also be set to a thinner setting, and make julienne cuts instead of waffles that have holes. If you don’t turn the vegetable you’re cutting back and forth, you can make slices that just have ripples. Back when I ate lots of fried potatoes, I used it to make waffle-cut potatoes. Yum.

Tonight’s dinner is a recipe I made up in order to try to copy geschnetzeltes–my favorite Swiss food. Geschnetzeltes can be made using veal, pork, or chicken; I always use pork. It’s small pieces of pork and mushrooms in a creamy sauce, and it’s usually served over rösti, or hash brown potatoes. I normally open a couple cans of mushrooms when I make this, but tonight I had a portobello in the fridge that was originally going to be grilled. I decided to cut it in pieces and use it in the recipe. It turned out wonderful! We also had a romaine and tomato salad, and used some more of the red vinaigrette I made Sunday. 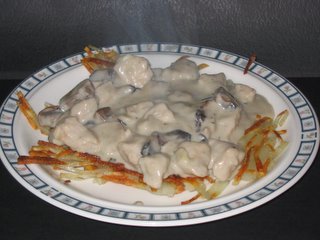 2 T vegetable oil
1 very large potato, or several smaller ones, shredded as if for hash browns

Heat oil in a large skillet. Spread shredded potatoes in a single layer and cook, covered, until bottom is browned. Using the lid of the skillet, transfer the entire layer, intact, to the lid, and then flip it over back into the pan. Cook, uncovered, until crispy on both top and bottom. Cut in wedges or serve with spatula. Makes 2 servings.

Brown pork in oil; remove from pan. Add mushrooms, and sauté about 5 minutes. Add flour and toss mushrooms to coat. Cook another 2-3 minutes. Add broth, Worcestershire, and mustard. Simmer gently, about 5 minutes, or until thickened. Add cream, salt and pepper, and meat. Heat another couple of minutes (to reheat the meat). Serve over rösti. Makes 2 large or 3 regular servings.

I had the "Börner Garnier-Set". Unfortunately it's broken, I have to look for a new one. It's a great gadget!

What a great post. Terrific toys, delicious food, plus a great story!!

I love rosti. It's one of my favorite ways to do potatoes and the geschnetzeltes sound awesome too.

Welcome back from Hawaii. Glad to see that you had a nice time. I love the photos you posted.

I also enjoyed reading about your trip to Switzerland... beautiful memories an wonderful things to bring back with you. ;-)

p.s. by the way, I finally posted the 4x8 meme, for which you tagged me.