Candied Jalapeños, Pumpkin and a few other things

Our daughter came up today to see us and to do her laundry, so I needed to get out of the living room (we have limited seating). So first, I spent a little time in the kitchen making Cowboy Candy.  If you've never heard of it, it's candied jalapeños.  I ordered a canning pot, rack, and tools while I was in Colorado, and this was my first time to use it.  (I've made jelly and jam before, but this was the first "canning.")

I saw this recipe on SBCanning, and was intrigued.  I love spicy and sweet combined, so I'm looking forward to trying some of these. It's suggested that these are good on hamburgers, and on cream cheese atop crackers. We'll see! 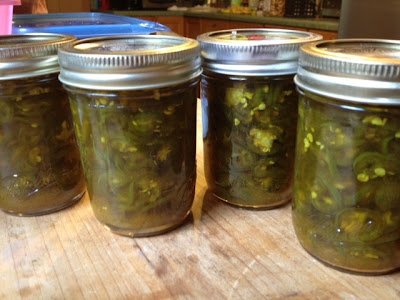 Next, I went down the mountain to pick up some things at Cost Plus (wine and beer), Trader Joe's, Vons, and the Ranch Market (I have to have their tortilla chips).   When I came back, T was sleeping in her father's recliner, and her father was finished with his painting on the deck and was watching the Ryder Cup (go USA!!!!).  So I went downstairs and grabbed the two pumpkins I bought yesterday at the pumpkin patch.  I was given a pretty good deal - they weren't open for business until today, but forgot to close the gate. The guy said he'd be glad to sell me some pumpkins as long as I had cash, so I got two white ones that are great for making pureé. The larger one would have been $10, and the smaller one $8, but he gave me both for $10.

I cooked these two ways.  One was done in the microwave and the other in my 2-tier vegetable steamer. To microwave:  Cut pumpkin in large chunks, scoop out the seeds and junk, and put in a bowl with about an inch of water. Cover the bowl loosely, and microwave on HIGH 20-25 minutes. Check after 15 and then just add 5 minutes at a time until the flesh is soft. 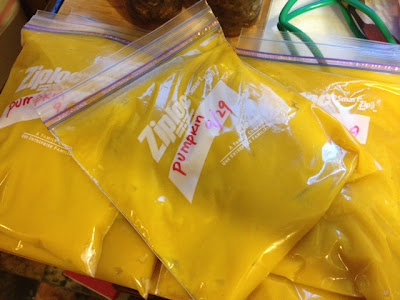 After the chunks have cooled enough to handle, scrape the flesh in to a bowl.  Pureé in a blender in batches, and place in freezer bags.  I did two cups in each quart-sized bag so it's the equivalent of a can of pumpkin.

After setting aside two cups for pumpkin butter, I ended up with 7 bags of pureé.

While I was bagging the pureé, I started the pumpkin butter.  It takes about an hour to cook it down 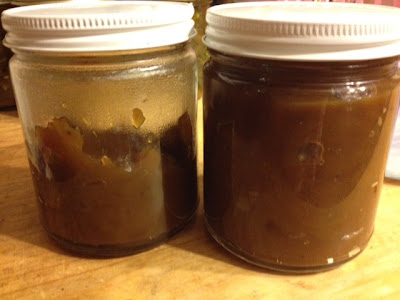 Simmer everything in a pot until most of the liquid has evaporated and the sauce has thickened.  Makes 2 cups.

This took about an hour, and after the first 10 minutes I had to use a spatter screen to keep it from splattering all over the stove.

You can't can this for safety reasons, but you can store it in your fridge for a few weeks (if it lasts that long) or for 3-4 months in your freezer. The batch only makes about 2 cups, so we should be able to eat it up!

I also managed to freeze and bag a pound of strawberries and a big basket of raspberries.  I just rinse, hull and slice the strawberries, and do nothing with the raspberries. I spread both fruits on a large cookie sheet and flash freeze. Then when they're solid, I put them in ziploc bags and put them back in the freezer. They're now ready for smoothies and desserts.

Dinner was Kung Pao Pork - and I forgot the peanuts again!  It still tasted good, but I missed the peanuts.  My daughter had never had it, and she gobbled it up. She says she won't have to eat during work tonight (she works midnight to 8 am).