Get Ready for Thursday Soup or Stew Nights Again!

Beginning in January, I'll be hosting Thursday Soup or Stew Nights again on "Ruminations." All you'll need to do is cook up some soup or stew, post about it on your blog, and then let me know by 9-ish Thursday night that you've done so. I'll do a roundup with a link back to your blog and recipe, and I'll include a pic of your completed dish. In honor of the return of the event, I made some soup - and had just a small bowl (Don had two large bowls!) since it was so rich.
Baked Potato Soup 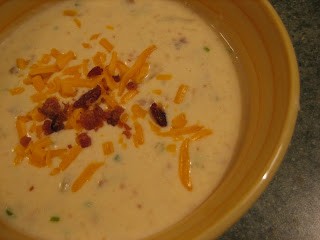 Bake the potatoes (70 minutes at 350˚). This can be done the day before, and potatoes can be stored in the refrigerator until ready to use. Cut them in half, and scoop out the potatoes from the skins. Chop one of the skins up and set aside.

Thinly slice the green onions, separating the white parts from the green.
Melt butter with white part of green onions over medium heat. Cook, stirring with a wire whisk, about 2 minutes. Sprinkle with flour, and cook, stirring, another few minutes until mixture is pale golden. Add cream, milk, white pepper and salt, and continue to stir while cooking over medium heat. Add potato, chopped potato skin, green onions, sour cream and bacon. Gradually add grated cheese, and stir until all cheese is melted.
Posted by Cyndi at 2:48 PM

Cyndi,
I love the idea of the virtual, community cookbook. Thanks so much. The soup looks fabulous. I'll be trying it soon.

That sounds so delicious. I'm going to have to give that a try. And I was just thinking to myself that we have now entered the stew time of year.

Please accept my entry for Stew or Soup night for this Thursday.

Thank you very much! Glad to be a part of a great blog event!