Käse Spätzle and a Kitchen Troll to go With the Witch 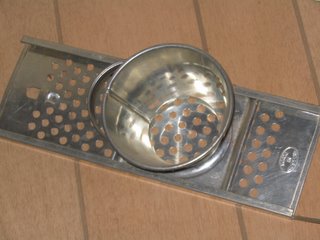 The odd-looking appliance to the left is a spätzle-maker. Spätzle is a Bavarian dish of noodles, sometimes homemade using the spätzle-maker, and sometimes made using dried noodles. DH’s mother, Erika, was born and raised in Augsburg, Germany, in the heart of Bavaria. She taught me several great German recipes before she died, and gave me this spätzle-maker so I could make my own spätzle from scratch. While I’ll post the recipe here for spätzle, tonight I used dried spätzle since I didn’t have time for the homemade. The most common way to eat spätzle is boiled and then served plain, as a side dish, but a very popular, tasty way to do it is what DH calls Ka-Spatzen, (kay-spotzen) which is slang for Käse spätzle (Kay-suh-spaytz-le).

Käse spätzle is spätzle mixed with Swiss cheese, topped with sautéed onions, and then baked until hot and bubbly. I’ve had it before at some German restaurants where instead of Swiss cheese, there’s a cheese sauce. We prefer it the way DH’s mom did it. She always served it with what we lovingly refer to as Erika’s Romaine Salad. It’s a simple salad of romaine, thinly sliced onion, and a dressing that just vinegar, water, oil, salt and pepper. The two are served on the same plate, so that the dressing from the salad mixes with the spätzle. Sometimes you take a bit of both together–the spätzle and the salad–it’s a really tasty combination. Every time I fix this, DH says, “Now, don’t let me eat too much. I’ll just do one good serving of the spätzle and finish the salad.” But every time, he goes back for a big serving of seconds and then complains because he eats too much. Oh, did I mention DH was also born and raised in Augsburg? His father was U.S. Army, and was able to stay in Germany until DH was in third grade. DH went to German schools until he left for the states, so he speaks German with the southern-style Bavarian dialect. He loves it when I cook German food, so I try to do it often. 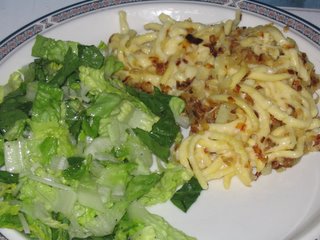 Combine flour and salt. Add eggs and 1/4 c water. Mix until the dough is stiff. Continue adding water until the mixture is of the correct consistency--that is, until it comes away easily from the sides of the bowl. Let stand for 30 minutes. Process through spatzle machine into boiling water. If you don’t have a spatzle machine, you can press it through the holes of a metal colander. Cook for about 5 minutes. Makes enough to feed 6-8 people.

Saute onions in butter until golden. Mix spatzle with cheese and place in baking dish. Top with onions. Bake at 350˚ for about 20 minutes, or until bubbly. Serves 6-8.

Chop romaine coarsley. Put in a large bowl with the onion. In a small jar with a lid, shake together the vinegar, water, oil, salt, and pepper. Toss with romaine and onion. Serves 4. 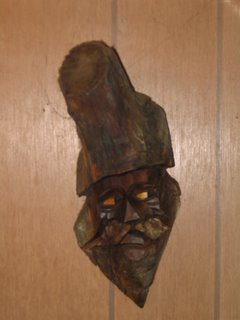 Hanging next to last night’s Swiss kitchen witch is a German kitchen troll. (At least I think he’s a troll–if you know what he really is, let me know.) He serves the same purpose as the witch–to watch over my kitchen and help me make good food. Erika used to have it hanging in her kitchen, and after she died, it came to us.

Where I live, Spätzle are unusual:-). It's hard to believe, but true.

Oh, I can believe it-you're up almost as far north as you can go, and Augsburg is 'way south. I learned that there are all kinds of regional specialities and different ways to fix things. I guess it's like that in every country.